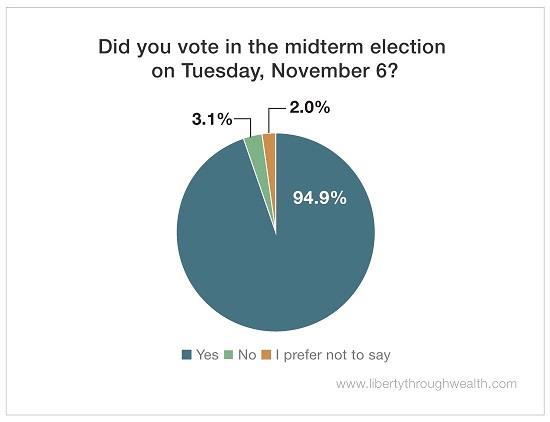 Investing in the Future of America

Last week, we asked our readers whether they voted in the midterm elections a few weeks ago and how important they thought it was to do so.

The chart above says it all.

It looks like nobody will deprive YOU of the right to vote!

In fact, 49% of eligible voters cast their ballots this year. That’s the highest turnout in a midterm election since 1914.

We also saw a surge in votes from college students, minority voters and early voters.

Although we won’t be able to say for sure what encouraged the vote this year… it could have something to do with the increase in voting campaigns and the intense political divide we talked about a few weeks ago.

It could also have something to do with more localized issues.

In this past midterm election, for example, not only were there 35 seats in the Senate and the entire House of Representatives up for grabs, but there were many elections and initiatives on ballots at the state, county and city levels.

In fact, voters in Washington State approved one of the toughest gun safety laws in the nation. This law will increase the age limit to buy an assault rifle from 18 to 21 and impose a 10-day waiting period for gun purchases.

Other states made some crucial decisions about the use of marijuana. Michigan voters legalized recreational use for residents over the age of 21, while Utah and Missouri approved medicinal use.

In Florida, voters passed a law on voting itself. This law restores voting rights to 1.4 million former convicts. The last time a voting law affected so many people was in 1920, when women received the right to vote.

We can understand why people would want to have a say in these important decisions, and we’re glad that most of our readers made their voices heard.

FDR would be proud.

The post Week in Review appeared first on Liberty Through Wealth.