Why a Weaker Dollar Is a Strong Bet 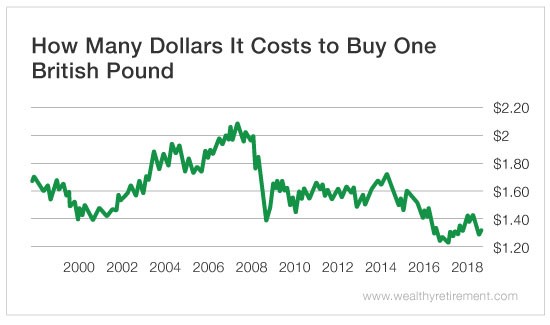 The great thing about investing is that there are two sides to every trade. There’s a winner and a loser. The objective is to have more winners than losers.

Right now, you have a winning trade staring you in the face. And it’s not a stock or options trade. It’s much simpler, and you can make it in any account. I would recommend making it in your IRA to defer taxes and boost your profits.

I call it the “Vacation Trade,” but you can use it for much more than that. Let me explain…

Let’s assume you want to take a vacation to London in two years. The dollar is near a record high compared with the British pound right now. If you look at the chart below, you can see how the pound has fallen (from nearly $2 per pound in late 2007 to around $1.31 per pound today).

There are many reasons for this plunge, including the recent Brexit fiasco that has sent the pound reeling. But things change quickly in the currency markets, and what’s cheap today could be very expensive tomorrow.

Today, you are holding the most powerful and pricey currency in the market. The dollar is beating down the euro, the yen, the Canadian dollar and the Australian dollar. And it’s massacring emerging markets’ currencies.

If you never plan to do anything outside of the country, this is still a really good investment opportunity. But if you have any overseas plans that are going to cost money, this could mean the difference between a five-star vacation and a three-star vacation!

The U.S. dollar is going to fall. It’s either that or we plunge into a recession. The Trump tariffs are going to accelerate the process unless there are agreements made between the U.S. and the rest of the world soon.

Thanks to tariffs and the strong economy, the dollar has become stronger. As the world’s major currency, the U.S. dollar is seen by investors as a haven during times of global economic upheaval. The kicker this time is that the U.S. is the only major economic power that is also raising interest rates quickly. The result is a very attractive currency… if you’re a foreigner.

The flip side is not so good. The stronger the dollar gets and the longer it stays strong, the weaker the U.S. trade position becomes. Despite what you hear about the U.S. no longer being an exporting country, it still is. Last year, we exported more than $2.3 trillion worth of goods and services.

As the dollar increases in value, every item or service we export gets more expensive. That means countries will start to look elsewhere. That will put pressure on the dollar as our goods and services experience less demand.

So while the current administration is engaging in trade wars, it is also feverishly trying to talk the dollar down. The president is explicitly calling for a lower dollar because he knows that a strong dollar is the worst possible outcome for U.S. trade, manufacturers and workers moving forward.

As an investor, now is the time to bet on a weaker dollar. You can do this by allocating some of your capital to currencies that will get stronger as the dollar weakens. You could also buy commodities like oil or gold, which historically strengthen because they are priced in dollars. I prefer the currency bets because they are less prone to swings than commodities.

Here’s how to do it: You can buy currency exchange-traded funds (ETFs) in any brokerage account, including your IRA. These ETFs mirror most of the change in the underlying currency. Looking ahead to that vacation in England, you can lock in the British pound at today’s prices. Then when the time comes, you can sell the pound ETF and not miss out on the move it may have had in the meantime. You can find a list of these currency ETFs here.

If you are looking to balance your portfolio with a non-stock trade, you can buy a basket of these currencies knowing that it’s a matter of “when,” not “if,” the U.S. dollar comes down to earth.