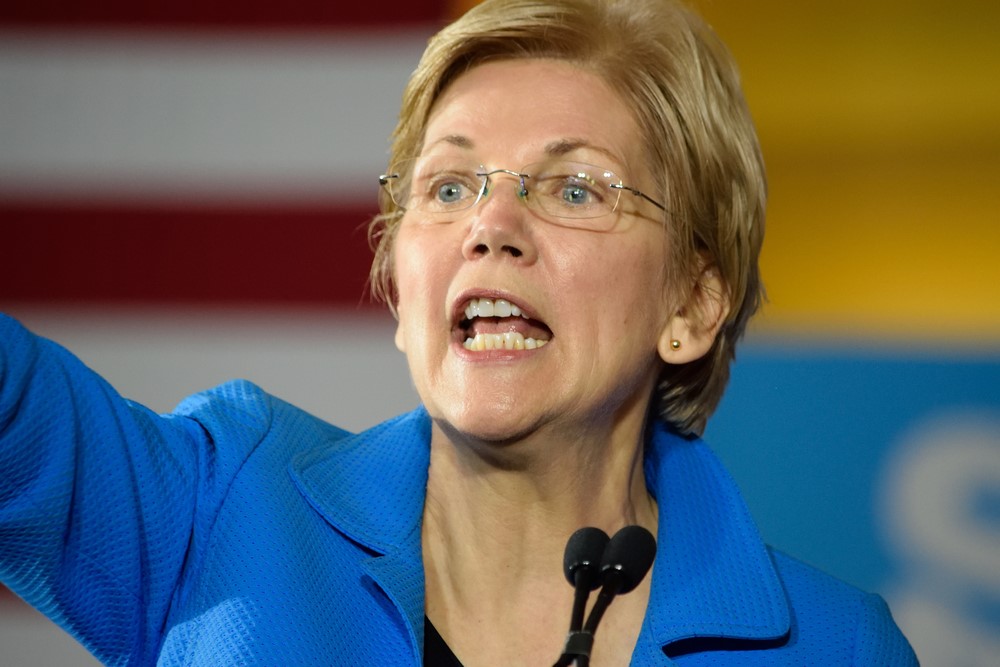 If it becomes law, it will be bad news indeed for the stock market.

We see our free market economy as the greatest wealth creator and anti-poverty program ever devised. Warren views it as an unfair system dominated by exploitative business managers and greedy shareholders.

In a recent Wall Street Journal editorial she openly asks what Americans really get out of capitalism.

My answer would start with faster communications, safer cars, lifesaving drugs and medical devices, the best hospitals on the planet, billions in corporate tax revenue, and the highest standard of living in the world.

She’s taking direct aim at investors, claiming that “our obsession with maximizing shareholder returns” enriches a few at the expense of the many and “is a root cause of many of America’s fundamental economic problems.”

You might have noticed that our “economic problems” – like slow growth, high unemployment, and consumer and business pessimism – have vanished in the wake of economic policies that Warren abhors.

She also seems unaware that the stock market is one of society’s most egalitarian forces, allowing corporate profits to be shared with anyone willing to work, save and invest.

The majority of Americans own stocks directly, through a mutual fund, or in their 401(k)s or other retirement accounts.

How has this panned out?

Fidelity Investments just reported that the number of customers at the end of the second quarter with a million dollars or more in their 401(k) accounts surged by 50,000 to 168,000, a 42% gain.

According to Fidelity’s senior vice president, Jeanne Thompson, “Individuals are increasing their savings rates, they’re taking advantage of their company match and they’re keeping a healthy percentage of stocks in their account.”

Fidelity is just one investment company, but the same phenomenon is playing out across the nation.

In May, Spectrem Group reported that the number of U.S. households with a net worth of $1 million or more hit a record 11.5 million last year. (Include home equity and there are several million more.)

U.S. corporations don’t just supply us with the goods and services we need. They provide us with investment opportunities that allow us to reach financial independence.

Yet Warren insists that the profit motive – the engine of free markets – is ruining capitalism.

And she intends to “fix” that with her Accountable Capitalism Act.

If passed into law, it would require corporations earning more than $1 billion a year in sales (not profits) to obtain a federal “charter” to operate.

It would obligate businesses to consider the interests of everyone “materially affected by the conduct of the company” – including suppliers and communities – when making management decisions.

The bill also requires that at least 40% of board members be elected directly by employees, rather than as representatives of shareholders.

It also opens companies deemed noncompliant to all manner of potential lawsuits.

Her goal is to disempower corporate shareholders and force companies to operate the way she believes they should.

Would this make capitalism fairer? Hardly.

In the private sector, transactions are voluntary. If you don’t want to work for a company, buy from a company, sell to a company or own its shares, you don’t have to.

It’s called economic freedom. And it has made us the most prosperous nation in the world.

Stakeholder theory is a respected system of corporate governance. Yet Warren’s proposed bill hijacks and perverts it.

Companies focused solely on short-term profits don’t last. If you cut corners on quality or overprice your products, your customers will leave. If you bargain with suppliers too hard, they won’t trade with you. If you undervalue your key employees, they will take their talents elsewhere.

Businesses already have a built-in incentive to do the right things.

Warren counters that in recent years wages have not risen as fast as corporate profits.

That’s true, but corporate greed – her all-purpose scapegoat – is not the reason why.

Automation has eliminated many routine jobs. Globalization has taken some jobs overseas. And high levels of unemployment created a labor surplus in years past.

But that is already changing.

As the economy continues to grow, the labor market will tighten further. That means wages are headed higher still.

Warren has a long history of railing against those of us who work, save and invest.

In her blinkered view, the economy is a zero-sum game, where someone does well only at someone else’s expense.

This is absurd, of course. Wealth is continually created, not simply spread around. Yet the goal of her Accountable Capitalism Act is to redistribute wealth at the corporate level, before the government even gets its hands on it.

Her bill expands the regulatory state, represents gross political interference in corporate governance, is a serious abridgment of economic freedom and discriminates against corporate shareholders like you.

If it becomes law, it will be bad for the economy, bad for corporate profits… and bad for the stock market.

Let your elected representatives know how you feel about it.