We’re Just Not That Jealous of You 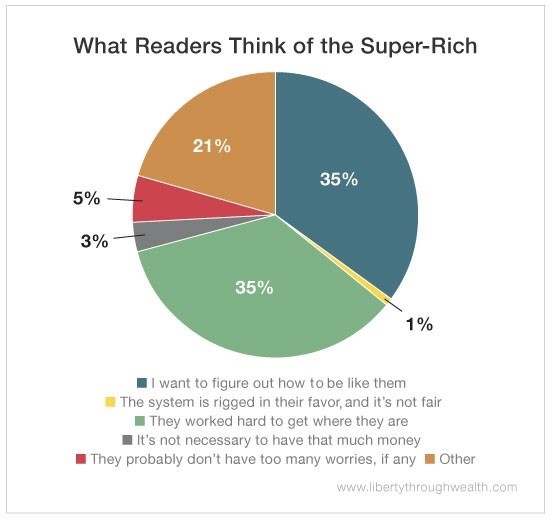 Last Monday, Chief Investment Strategist Alexander Green wrapped up his three-part series on the “super-rich” – how they got that way, what they do with their money… and why they shouldn’t be demonized.

Along the way, we asked you to tell us what you thought about the super-rich in this country.

Turns out, you don’t demonize or resent them either.

An astonishing 70% respect the smarts and grit it took for them to get where they are… and you aspire to do the same (perhaps you’re already on your way). In fact, that percentage is even a bit higher as about half of those who wrote in lauded the wealthy for their “hard work and good fortune” and being a “testament to the American dream.”

Even those who rightly noted that some of the super-rich inherited their money said that someone in their families along the way built a business, invested and protected their wealth, and transferred it to future generations.

A mere 4% think the fix is in to make the rich richer… and that no one needs as much money as, say, Jeff Bezos or Warren Buffett.

Former President Obama once infamously claimed, “If you’ve got a business, you didn’t build that. Somebody else made that happen.”

It’s true that most people have had inspiration, mentorship or assistance along the way. But for those who have managed to get wealthy by stewarding a business, controlling their spending and maximizing their income by investing (and reinvesting)… then yes, they did make that happen.

And once you have more money than God, you can give it away! It’s well known that America breeds some of the most generous people in the world. In 2017, corporate giving rose 8% to $21 billion, while foundations – many of which are created and led by super-rich folks like Bill and Melinda Gates – gave almost $67 billion.

So the next time someone tells you it’s fair to tax the rich and redistribute their wealth, it might serve to remind them that they didn’t build that either.